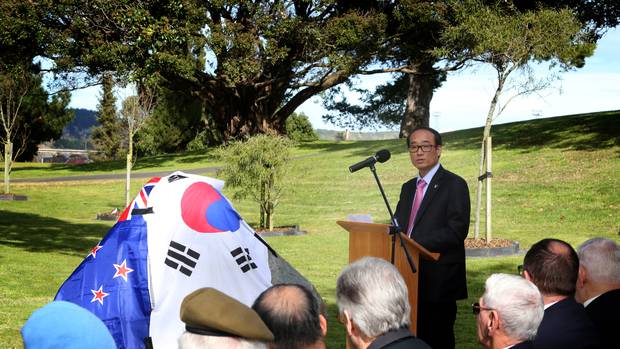 Hongkon Kim, the former Deputy Ambassador to New Zealand is accused of three counts of indecent assault at the Wellington embassy in 2017.
The charges relate to alleged incidents involving a male staff member at the embassy.
A warrant for his arrest was issued by a Wellington District Court judge in late February.
However, Kim had pleaded not guilty to the charges and remains overseas.
The Korean Government has so far refused to co-operate in getting him back to New Zealand to face trial, and he has instead been posted to the Philippines where he is currently serving as Consul-General.
The Ministry of Foreign Affairs and Trade said New Zealand "has made strong representation about this case" to the South Korean Embassy and the South Korean Government in Seoul, including both the Ambassador to Seoul and the South Korean Ambassador in NZ.
"We have engaged at senior levels with South Korean government officials and they are well aware of our views," an MFAT spokesman said.

The ministry became aware of the police investigation concerning Kim in August last year.
Advertisement
<iframe width="300" height="250" title="3rd party ad content" id="google_ads_iframe_/83069739/nzh/new-zealand_2" src="https://316cd7176eaabfa985364aec8d5d8e5d.safeframe.googlesyndication.com/safeframe/1-0-37/html/container.html" frameborder="0" marginwidth="0" marginheight="0" scrolling="no" style="border: 0px currentColor; vertical-align: bottom;" data-google-container-id="6" data-load-complete="true" data-is-safeframe="true"></iframe>
Advertise with NZME.
"We are sensitive to the matters raised in this case and acknowledge the distress expressed by the individual concerned," the spokesman said.
"International law is clear when it comes to issues of diplomatic conduct. All diplomats are expected to respect the laws and regulations of the country where they are posted."
The ministry sought waivers of diplomatic immunity from the South Korean Government to allow police to conduct evidential inquiries at the South Korean Embassy in Wellington in September.
"This request, conveyed to both the Ambassador in Wellington and South Korean Ministry of Foreign Affairs in Seoul, was declined," he said.
"This was a disappointing decision."
Kim left NZ in February 2018, and the MFAT spokesman said diplomatic immunity for the former diplomat no longer applied as he was no more accredited to NZ.
Advertisement
Advertise with NZME.
"NZ's position is that we expect all diplomats to follow the laws of the country there are in, to be legally accountable for their actions and to allow NZ police to conduct their investigations," the ministry spokesman said.
"We expect the same high standards of our government staff when posted there."
A source close to the victim told the Herald he remains hopeful justice will eventually be served.
He is being supported by survivors group MOSAIC, where he has reached out for help.
Print this article
이 게시물을... 스크랩
이전글 다음글
목록